Home » Blog » Laos – a perfect destination for a motorcycle journey

Laos – a perfect destination for a motorcycle journey

Motorcycle Area is an independent site relying on your support. When you purchase something through one of the links on this site, we may receive a small commission.

Laos – once a hidden travel gem, a subject of numerous hostel talks constantly mentioned by intrepid backpackers who had claimed to find the Southeast Asian equivalent of Shangri La in this sleepy nation. Laid-back, undiscovered, unspoiled by mass tourism, rich in cultural and religious heritage, abundant with magnificent tropical scenery – this was the image of Laos circulating long time ago among the travelers circles.

However, these days Laos has undergone serious changes – the banana pancake backpackers flock to places like Luang Prabang and Vang Vieng in massive numbers, once incredibly hospitable locals quickly learned the value of a tourist dollar and is no doubt that this landlocked nation has permanently lost some of its pristine charm.

On the other hand – even these days Laos remains the sleepiest nation in the Southeast Asia, still offering the same natural wonders and cultural landmarks which for many years have attracted travelers from all around the globe. Tourist numbers are still nowhere as high as in the neighboring Thailand. There is also significantly less development than in Vietnam or – especially – in China, spoiling the countryside. The comforts of civilization and architectural wonders of places like Luang Prabang are also only a stone throw away from exciting ethnic minority villages and splendid natural sceneries.

Another truth about Laos is that the country makes for an outstanding destination for motorcycle rides. Although plenty of roads are in rather poor state, the good thing about them is that not only most of them pass through outstanding mountainous regions but also offer a quite solitary riding experience. That’s because the traffic volumes in Laos are significantly lower than in its Eastern neighbor – Vietnam, making it possible to enjoy long days riding on the spectacular windy roads without having to compete with hordes of other bikers. 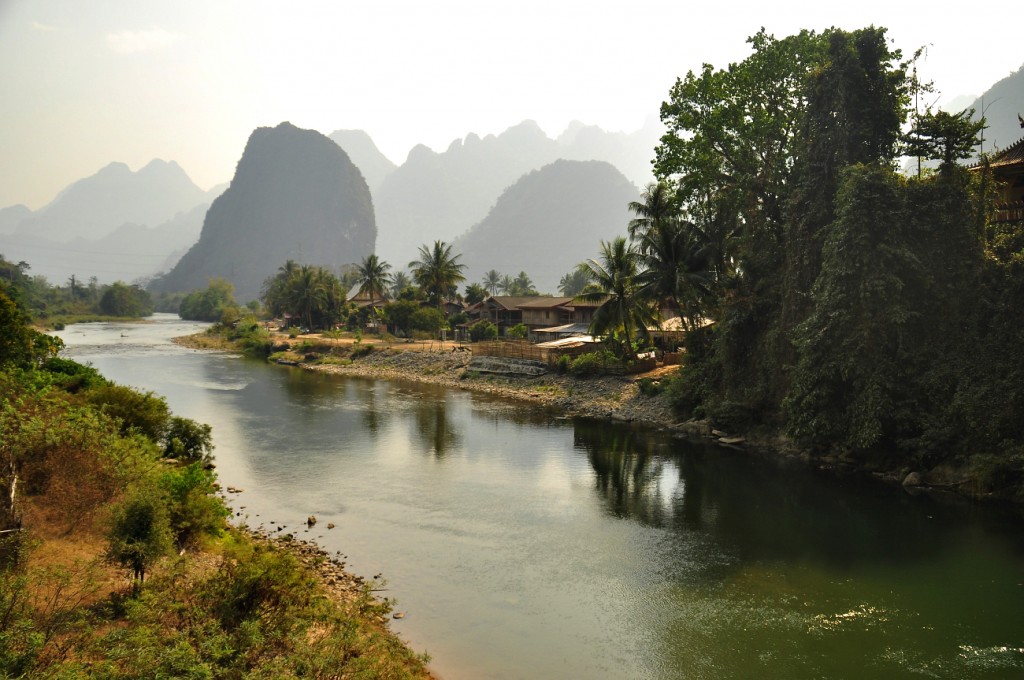 Just like in several other Southeast Asian nations, motorcycles are the primary mode of transport used by locals. As a result, while travelling around Laos on your motorcycle, you can enjoy the access to the relatively dense network of motorcycle repair shops. In fact, every single village comes up with at least one such facility, usually located in a small wooden cottage or someone’s garage. Therefore you can rest assured that you will hardly ever face the risk of getting stuck with broken bike somewhere in the middle of nowhere. What is more, you won’t have to carry too much equipment in your saddle bags. In fact you are never too far away from the nearest locally owned shop which can help you with all kinds of repairs, from flat tires to broken engines. Everything naturally for a very low price.

Laos has plenty of wonderful sights which can make any motorcycle ride an unforgettable experience. Travelers talk with delight about amazing Kuang Si waterfalls, picture-perfect old capital of Luang Prabang, Chom Ong Cave, laid back Nong Khiaw and Muang Noi, jungle expeditions in Luang Namtha, magnificent karst scenery in Vang Vieng, coffee plantations and countless waterfalls in Bolaven Plateu, to name a few. You can be sure that you will be tempted to take the camera out of your motorcycle backpack much more frequently than you might think. Add all the long stretches of fabulous karst sceneries and rice paddies located in between the most famous landmarks and you have a clear answer why there is no better way to explore all these places other than on your motorcycle.

One particular route any adventure biker may want to attempt is the Ho Chi Minh Trail in Southern Laos. Just imagine riding on abandoned mountain roads along the border of Vietnam, witnessing the remains from the Vietnam War such as tank wrecks! If you are not afraid of tougher road conditions and other physically demanding challenges and have the adventure spirit – this is the route for you.

To sum it up, Laos is a highly recommended destination for a long motorcycle trip. Even on its own the country is worthy spending a couple of weeks riding through its realms. On the other hand, Laos blends perfectly in the classic Southeast Asian itinerary, combined together with Vietnam, Cambodia and Thailand.  And there is no better way to explore all these tropical nations than on the motorcycle. Don’t wait any longer – add Laos to your itinerary today and embark on one of the most exciting journeys of your life!

5 Motorcycle rides in America you have to try

5 tips on how to choose the best motorcycle backpack

As an Amazon Associate I earn from qualifying purchases.